This post comes late after my EuroPython 2019 talk on “Modern Continuous Delivery” in Basel. But there is no need to worry: Advice on writing software that outlasts hypes on modern computing has no hurry to appear on stage.

What a great time!

Deployment automation, cloud platforms, containerization, short iterations to develop and release software—we’ve progressed a lot. And finally it’s official: Kubernetes and OpenShift are the established platforms to help us do scaling and zero downtime deployments with just a few hundred lines of YAML. It’s a great time.

Can we finally put all our eggs into one basket? Identify the cloud platform that fits our needs, and jump on it? That could well backfire: Vendor lock-in is the new waterfall, it slows you down. In future you’ll want to jump over to the next better platform, in a matter of minutes. Not months.

So, how do we do that? What’s the right approach?

The definition of Continuous Delivery

A modern software development project does:

Nothing new. You’ve heard this before.

Vendor lock-in is the new waterfall

Software development has become complex. So complex that there are numerous services popping up almost daily that help us getting things done. Most notably, these are application delivery platforms nowadays (Amazon AWS, Microsoft Azure, Google Cloud — just to name a few). When we use offerings across several such providers, which is becoming increasingly popular, we speak of multi-cloud dependencies.

Is there a difference between a choice and a lock-in?

While all offerings are choices they typically entail a lock-in, because we don’t have standards and tooling yet that allow us to effortlessly switch from one solution provider to another. And when there are reasons to make a switch, lock-ins make it inherently difficult to move fast. This is a problem.

What can we do about vendor lock-in?

Software development is not about “using <technology>” or “using <platform>”. As engineers we must think in terms of “problem to solve” (requirements) and applying proper development practices (engineering). If we rely on platforms to solve problems for us we’re doing it wrong. Engineers must learn to follow principles of good software design, to write and maintain “clean code”. 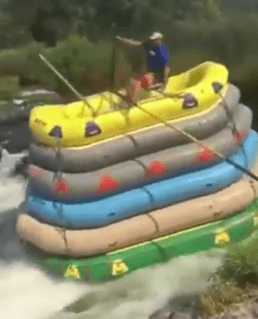 One of those principles you learn as an engineer is to maintain boundaries between systems. In a modern software development project you’ll see four of such “layers of responsibility” that define boundaries:

Think in terms of technologies and tools, or services and environments you use in each to understand why we have those.

Now we have layers. What do we gain?

Note how the layers use an interface to talk to the next layer above. This allows us to address them separately. In other words,

This is the power of separation of concerns.

Can you spot the DevOps responsibilities in the image of “layers”?

It sounds like a contradiction, but good DevOps people keep all 2x2 concerns neatly separated.

—The modern world is a DevOps world

Also note that for this to work well you need to make your interfaces simple and stable.

The more you invest in this flexibility and clean separation the easier your task will be when the day comes to make a change.

A delivery pipeline should be beautiful. Make sure you can tell a story!

Working code samples to your rescue

What is better than starting to investigate late and working on refactoring under time pressure? Knowing your possibilities and turning to working code samples when you need them!

That’s where the Painless Continuous Delivery Cookiecutter comes into play. It’s a project template generator covering many of the most popular combinations of public service offerings you may be working with. At VSHN AG we’re working on extending it—for your independence. Try it out, let us know if you find it useful, and contribute if you feel like!

For the start you may want to take a look at one of the generated setups on GitLab, the live demo for the EuroPython talk. Enjoy!

Slides of this talk are available from SpeakerDeck.